Monday I had the opportunity to have Jory sub for me, but I chose to stay home all day instead.  I’m so behind on paperwork and normal household stuff.  So instead of subbing for me, SHE went to the rental house to do some painting!  She painted the ceilings in the two bedrooms and both bathrooms.

After work, Jim went over and painted the second coat on the loft room, I showed up right as he was finishing so was able to do the edging/cutting-in.  That room should be done now! 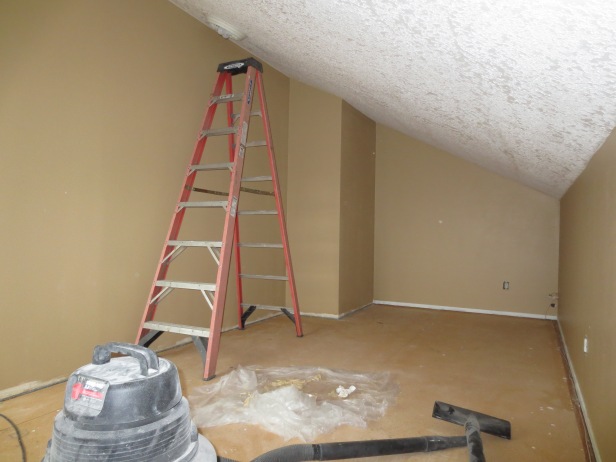 Then we went downstairs and put a coat of paint in both of the smaller bedrooms.  We worked until almost 9:30.  Yikes!

I made a stop at Lowe’s before going to the house to get the pricing estimates for the carpet.  It’s going to be about $3,000 (which is about $1,000 more than we anticipated).  That’s for the whole house- including the purple room, carpet on the stairs, and having the carpet wrapped around the balusters like it originally was.

Total working hours between the three of us: 10.5

Tuesday I made another trip to Lowe’s to get the carpet/room variables figured out and pick up samples to take back to the house.  The carpet we chose for the other rental house is the best looking (and the cheapest!).  Home Depot also sells a similar one, but it’s a little darker flecked, but I don’t know that it’s worth getting a price estimate ($50 non-refundable measuring fee if we don’t go with them). So I think we’ll just stick with what we know.  Maybe.

Jim went over after work and did the final ceiling coat in the one bathroom and left the paint for me to do the laundry room walls and ceiling.  I had some paint left in the tray so I painted the Christmas-stamped window sill, then the closet jamb for that bedroom, then headed into the bathroom to paint around the window above the tub/shower, eventually deciding to paint the walls above that, too.  Jim had painted the second coat in both of the smaller bedrooms and I was able to cut-in (edge) half of one bedroom.

We realized we are ALMOST out of paint.  Like, to the point of no more painting any new walls- we can only touch up and edge walls that have already received 2 coats of paint.

Wednesday Jory was able to spend a few hours over there in the afternoon. She finished the edging/cutting-in for the tan paint, and also painted the dining room brown walls with a fresh coat.  I forgot to ask her to also do around the front door (oops!).  After work I stopped at Miller to grab two gallons of the beige paint for the kitchen, family room and loft…but chickened out when I got to the store, so instead I grabbed a few more samples, took them to the house, re-confirmed that the beige color I picked out really IS the right color for the house, went back to Miller to get the paint, then stopped at home to heat up some dinner for Jim and I, met Jim at the house- we ate our dinner then got to work!  He scrubbed all the yellow walls, so they are now ready for the beige paint.  I scraped the two bathroom drawers that were so coated with multiple layers of paint, that sanding just made the outer layer turn to rubber- so I had to strip them, with stripper stuff, it was a gooey mess, but they are down to the bare wood!

I also spray textured a few repair spots, so now we are ready to paint the kitchen walls.  Jim re-hung all the light fixtures that we removed for ceiling painting (or bulb replacement).  I painted another coat of white above the bathroom surround so now it’s ready for paint.  It was basically a night of prep- because I have Jory subbing for me all day Thursday- it’s going to be my cabinet painting day- and while that first coat is drying it’s going to be use-up-the-rest-of-the-tan-paint day!

Thursday I had Jory coming to sub for me all day….with a plan of having Jim join me after work so we could get A LOT accomplished.  We had already decided to take Friday night off.  The first hiccup was the prediction of snow.  Jim decided to leave his car in the garage and take his truck since they were predicting a bad afternoon commute.  Except that his battery was dead, so he took my Expedition.  Told me to go ahead and take his car and if I get stranded at the rental house, no biggie, he’ll come pick me up after work.

I left the house shortly after 8:30, stopped to run the water at the rental (we had a partial freeze Monday night- it’s been in the 20’s).  We left the furnace at 70 all night and I had blocked the bathroom so that the heat would go from the register straight into the cabinet (under sink) to keep that area really warm!  Worked like a charm!  I headed out to start my errands- grabbed a Starbucks, filled Jim’s car with gas, and went to Lowe’s to order the carpet.  We’ve decided NOT to carpet the purple room, but we will carpet everything else (including the stairs) and have them wrapped around the balusters and tucked under like how the carpet has always been there.  Hoping to get an installation date of February 17th.  We have renters lined up to move in on March 1st!  (So no starting any new projects, only wrapping up what we’ve undone!)

I left Lowe’s and stopped at my parents’ house to pick up their three plastic tables, ended up sticking around and refilling bird feeders and taking pictures of the deer and talking to my parents.  It started to snow!   I hurried to the rental house and got the tables all set up and every single cabinet door (there’s 22 of them!) elevated off the tables somehow (it was tricky).  I found boxes, rolls of duct tape, closet/shelf rods, kitchen shelves, anything I could find to lift them up a bit so they weren’t laying directly on the tables! 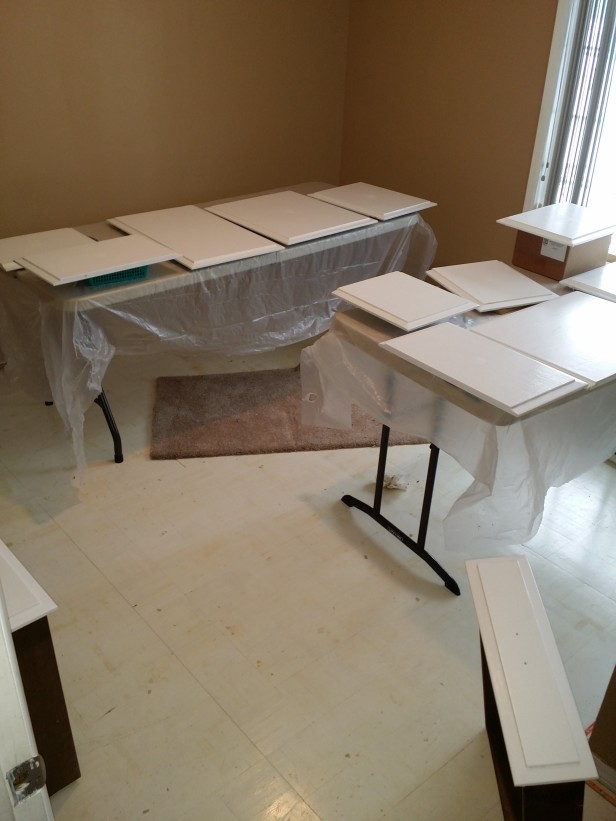 I hadn’t started painting yet because the cabinet guy called at 10:30 and said he’d be out around noon.  Meanwhile (at 11:40am), it looked like this outside:

No biggie.  I still have a couple hours…maybe.  I was still expecting the cabinet guy to show up any second and didn’t want to dive in with the paint roller and have to stop mid-project, so I cleaned the kitchen and continued getting all the prep work done for the cabinets.

Fast forward- it was 12:30 and I still hadn’t started painting.  And it looked like this outside:

Um, this kind of changes things a bit.  Cabinet guy called to say it would be a couple more hours before he’d make it out there.  I decided I needed to get busy painting!

Boy it takes a while to paint that many doors.  When all was said and done, I ended up with three coats!

I was getting nervous.  It was 1:52pm, he still wasn’t there…and it was starting to actually SNOW- like big flakes, it was really going to start accumulating now!

I needed him to hurry up!  I wanted to go home! I figured my window was narrowing and if another hour went by, I’d be stuck there.

In my rush, I tipped over the full gallon of cabinet paint: 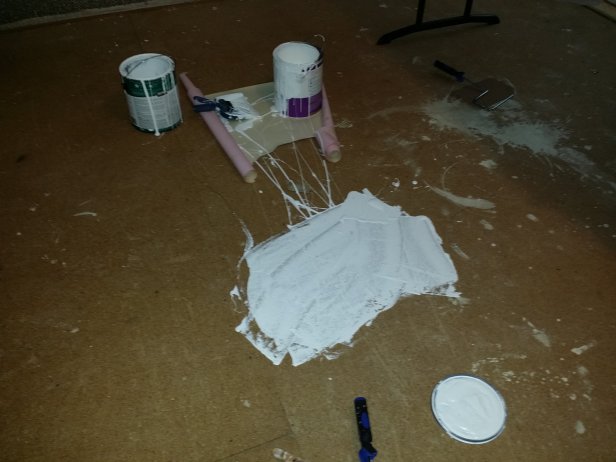 I ended up cleaning it by using a hand broom and mini dust pan- dumping all the spilled paint into an almost-empty gallon can that we had- essentially wasting BOTH.  Ugh.  Then I washed the floor to get the rest of the paint up.  I was NOT having a good time.  It was 2:40pm, my kids were all home from school and I just wanted to be home, too.  Waaaaaahhhhhhhh…..

Cabinet guy DID show up shortly after that….probably around 3:15 or so.   He took a ton of measurements and we will end up with an exact match.  Yay!  And it will be ready by Thursday!

Jim called at 4:00 to tell me that his office was closed and he was on his way home- he’d come pick me up. 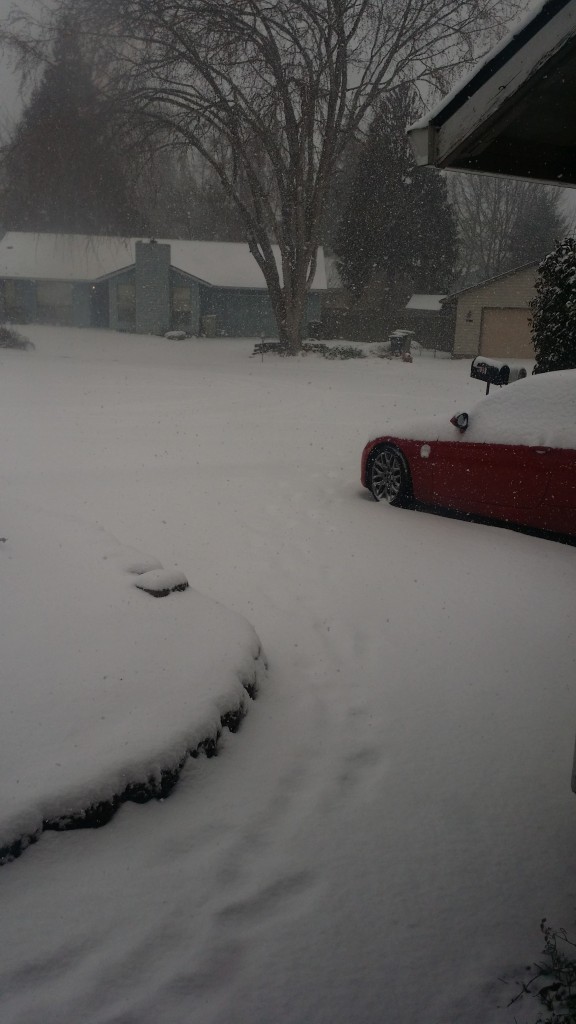 He decided to brave the roads and drive his car home.  It was either that, or rearrange the garage to move it indoors for safe-keeping!  It was still light out, and traffic was lighter (everyone had started leaving work at noon!), and boy did he slip and slide all the way home.

Little red will never, ever, ever be allowed to go out on a snowy day again.  She is NOT built for slick roads.  Her poor little tires just can’t handle ANY amount of snow!

Anyway- not as productive as I would have liked… but look how shiny and pretty the cabinet doors are now!

Friday was a snow day!  Jim’s office closed, my daycare closed, sure- we could have gone to the house and worked all day.  But instead I chose to take advantage of the bonus day and stay HOME and take care of home stuff… like doing our taxes- lol!  Jim went over to the house around 2:00 to check the faucets and do a couple minor repairs.  The laundry faucets were leaking, and so was the hot water connection under the sink- so he got those all tightened up (and replaced the gaskets I think).  He also rewired the 3-way switches that were wired improperly.