I am in love with this thing!

I’ve been using it for two solid months, so I figure it’s a good time to post my review.

The main reason why I wanted to buy the FitBit Flex was to track my activity levels when we are renovating houses vs normal life.  I know I burn more calories when we are actively working on the rental properties- I can eat burgers every day, get lattes and donuts every morning, and eat horribly- and my weight stays the same!    I can also see a difference in the tone of my legs and arms and shoulders when we renovate houses.    The rest of the time (aka normal life) I really have to watch what I eat and it’s easy to get “fluffy”.

I wanted to see what was actually happening to my body- what the calorie burn difference is, and I knew I could get that information with the FitBit.  So I bought one!

Out of the box it had a medium-level charge so you can start using it immediately.  It requires a computer to set-up.  You plug the tracker into the computer USB slot and create an account, enter your age, weight, height, goals etc.  After it’s set up, you no longer need the computer- it just syncs with your cell phone via Bluetooth and the FitBit app (android/apple).

This is the working piece of the FitBit Flex….the tracker: 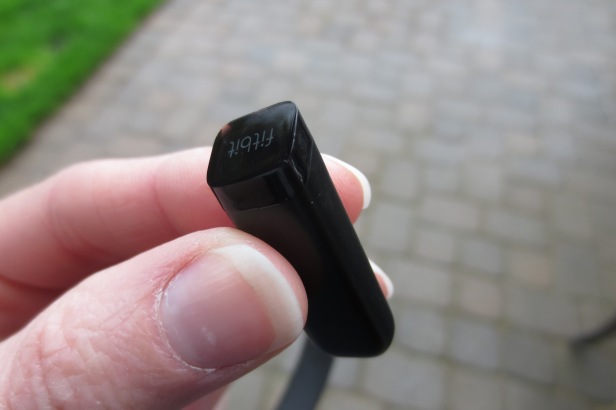 Yes, it’s tiny.  It just pops in and out of the bracelet (which by the way, you can buy other colored bracelets separately for about $15 each.)

The tracker fits into a small opening on the underside of the bracelet:

My first impression- I was a little worried about how comfortable it would be to wear all day long.   I definitely noticed it, but it wasn’t uncomfortable.

After a couple hours I decided to move it from my left wrist to my right wrist (because I like to wear a watch on my left wrist and the Flex prevents me from being able to do that). By noon I had recorded 6,000 steps.  Hmmm….that doesn’t seem right.  I found out that there’s a setting for dominant hand or non-dominant hand, so I switched the setting to dominant.  Ended that day at 12,324 steps, 5.14 miles walked, 2,197 calories burned overall.  I assumed there was some overage due to me wearing it on my dominant hand without changing the setting for a few hours.

The next day it showed 8,941 steps.  The day after that I ended up moving it back to my left wrist and adjusting the setting appropriately, and it recorded 9,852 steps.  Both days we did very little (or no) work on the house.

That weekend we worked hard on the house- and I averaged 12,000 steps…. 5 miles…. 2,100 calories burned.  And my calorie intake those days averaged about 1,600.  No wonder I stay in shape when we’re working on houses! 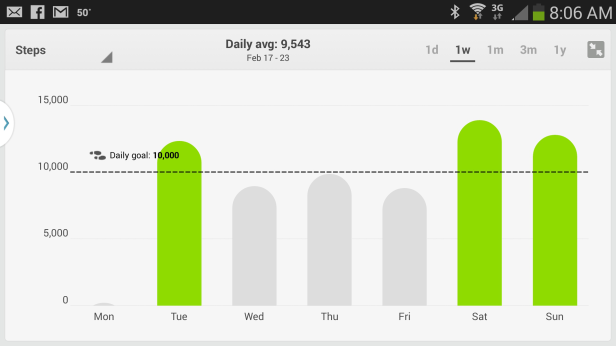 The user interface is great- super easy to use and instantly gives an overall picture of how you are doing.  This is the main screen that you see when you open the app on your phone:

Did you see that it tracks sleep?  It doesn’t really “track” it…. you have to tap the bracelet repeatedly to put it in “sleep” mode- essentially telling it you are “going to bed” and then when you wake up you tap it again until it registers that you “are awake”.  For the first few nights I did wear it all night (while sleeping) because I wanted to see if I really was sleeping as soundly as I thought…. and yep, I do.

It shows periods of restlessness at the very beginning and very end of my sleeping, which is what I would expect.  After three nights of consistent readings, I stopped wearing it to bed and just put it on my nightstand.

When I was really sick, though, I wore it all night to track my restlessness…..and yep- it works!  It showed a few periods of restlessness and the awake period I had when I couldn’t breathe because my nose was so stuffy.

Water intake. You can track your water intake with the phone app (manual entry of course) and it’s a nice motivator to see that you should be drinking more.

Calories in versus calories out.  You have to manually enter your foods and I was pleased to see that there’s so many food options already programmed, and it’s easy to custom enter your own foods.  I liked seeing how many calories I was taking in versus taking out.

Hour by hour detail.  There’s  a graph to see how your activity varies from hour to hour.  It’s interesting to see.

As far as accuracy…. I do believe it’s accurate.   At least mine is.  I’ve heard from other people that there’s is waaaaaaay off.  I periodically test it (looking at the screen to see how many steps are registered- then walking throughout my house and counting steps, then going back to the screen to see what it registered).  Sometimes it counts short, sometimes it counts over, sometimes by just a few steps, sometimes by 10-20.

Regarding aerobics or zumba or other fitness classes- it doesn’t really count “steps” accurately for those activities.  For example jumping jacks- it won’t register each jumping jack as a step.  You are doing more activity than it’s tracking.  But on the flipside, it counts steps while folding laundry, washing dishes, and taking showers (arm movements).  Some people are really bothered by that, but you are likely using it to track your ACTIVITY levels, not actual “steps”.   It’s calories in versus calories out…. and folding laundry, washing dishes and taking showers burns more calories than sitting on the couch watching TV and that’s what you are trying to do, be active- right?

I LOVE my FitBit Flex and I wear it ALL DAY EVERY DAY from the second I roll out of bed, until I crawl back into bed.  I wear it when I’m running, doing my fitness classes- I get super sweaty and it doesn’t bother me AT ALL.  Sometimes I wear it a little tighter, sometimes a little looser.  I don’t even notice it anymore.

It’s totally waterproof- I do wear it in the shower (I might not be walking in there, but I am moving and every movement counts!)

Update:  it is NOT totally waterproof.  My family has three FitBits and the only time they stop working completely (no lights, won’t charge, won’t reset) is after a lot of exposure to water.  I wore mine to the beach one day (Hawaii) where I was swimming in the ocean, then swimming in a lazy river and that night it stopped working, but I didn’t realize it was because of the water.  It took a couple days before it started to work again.  Recently, my husband had his tracker stop working completely- like completely- to the point of FitBit sending us another tracker- and we realized that was the day we spent 5 hours in a lazy river in Las Vegas.  My daughter’s tracker stopped working completely last weekend- no lights, no nothing.  After a lot of water play and sweating.  I decided to try the rice bag trick (put the tracker in a bag of white rice to draw out any moisture) and voila!  It works again.  So moral of my story- don’t submerge it for long periods of time and if it stops working try the rice bag to see if that brings it back to life.

My only complaint with the product is that you have to take it off to charge it.   I try to do my charging overnight when I won’t be taking any steps.  Of course I get my notifications that the battery is low during the daytime- and I just hope I can make it last. Sadly, once the indicator (phone app or computer) shows the battery level as gettting low- it’s not going to last a full day.

And I do wish there were more bracelet alternatives, not just different colors, but maybe something a little dressier or fancier (bling!) for those times when you want to dress up a bit (and not wear a rubber athletic band!).

OH- if you are worried about the bracelet being cumbersome during some activity (or not matching your outfit if you’re dressed up), I’ve read that you can put the inside device in your pocket instead…but it’s so dang tiny I’d be scared to lose it!

Update: I do put it in my pocket if I’m pushing a shopping cart, or towing a suitcase behind me, or walking at my treadmill desk using the computer, or if we are on a walk where I’m carrying a coffee or holding an umbrella.  I once walked for a solid hour in an airport towing my suitcase and it registered ZERO steps.  Gah!  Or I spent an hour at my treadmill desk blogging- ZERO steps.  So yes, sometimes it’s best to put it in your pocket.

Oh, and for the times you don’t have your phone with you but want to see your progress- there’s a series of 5 lights on the band.  Each light represents 20% of your goal…. so if your goal is 10,000 steps, each light represents 2,000 steps.   Tap the bracelet twice quickly to get a read-out.  For each solidly-lit light, that’s 2,000 steps completed.  If there’s a blinking light- that means you are working on that series of 2,000 steps- it will blink 1-5 times, the more blinks, the closer you are to completing that set.  Just use your phone app- it’s way easier- lol!

And I’ll write about how it’s helping me reach my fitness goals in another posting.  I’ve learned a lot about myself over the past couple months, thanks to this little gadget!  Unfortunately, that also means I spend less time sitting at the computer to blog- because I’m trying to stay active!

2 thoughts on “My FitBit Flex Review….”