We’re MAKING bacon from “scratch”.  As in, we bought a skin-on pork belly slab to MAKE bacon!

Yep, there she is- a giant 15-pound slab of pork belly.  Not as thick as we probably could have purchased from a butcher, but for our first step we thought we’d better try ‘cheap’.  Cash & Carry sells these pork belly slabs (found in their giant walk-in freezer, which might be strike one since it’s not as quality as a cut) for $2.70/pound.  (Next time we will buy a thicker and fresh pork belly from a butcher.)

Step one- cut the pork belly slab into manageable widths.  But first, the kids noticed the nipples and  had to stop and take pictures.  It’s not every day that you get your meat with the skin on……and when that skin has nipples…..well.   Reality.

Anyway, we cut our slab into thirds for easier handling.

Side note: we read conflicting “best methods”- half of the people remove the skin at step 1, while the others don’t remove the skin until after smoking.  We removed the skin from two of our slabs, keeping the skin on only one slab.

Step two- add the ‘brine’.  Ours was 4 cups of kosher salt and 2 cups of brown sugar. 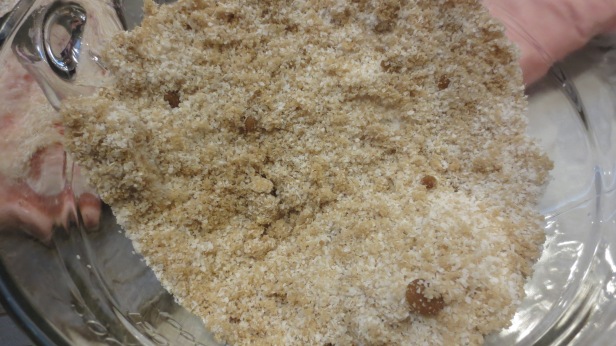 Heavily coat each piece (both sides).

Step three- wrap the slabs tightly and store in the fridge for seven days to cure.

If you are using saran wrap instead of ziplock bags (our slabs were too big to put in ziplock bags), you’ll have liquid seeping out, so keep it in a bowl or something.

Next time I’m going to put on a thicker coat of the dry brine, then use a FoodSaver to seal the slabs into an airtight container.  I will also flip the meat every day.

Step four- on the 7th day, unwrap the slabs.  I noticed that the salt cure was dried up and powdery.  The meat seemed really dry so I wasn’t sure the brine worked like it should have.  Rinse the slabs, removing all of the brine.  Rinse really well!  Next time I’m going to also soak the meat for an hour in cold water to pull some of the salt, as our bacon turned out super salty.  The brine obviously worked.

Pat it dry and put the slabs back in the fridge, uncovered, for another 24 hours.  This is to allow the meat to dry out, which will make the “smoke” adhere to the meat better the next day.

(Disregard the bungee cord, this fridge was formerly a keg-erator and the bungee is to keep the CO2 tank upright and in place.)

After the 24 hours is up, it’s time to smoke the slabs.

Ideally, you want a temperature of 150-180 degrees for smoking.  Smoke the slabs for 2 hours. 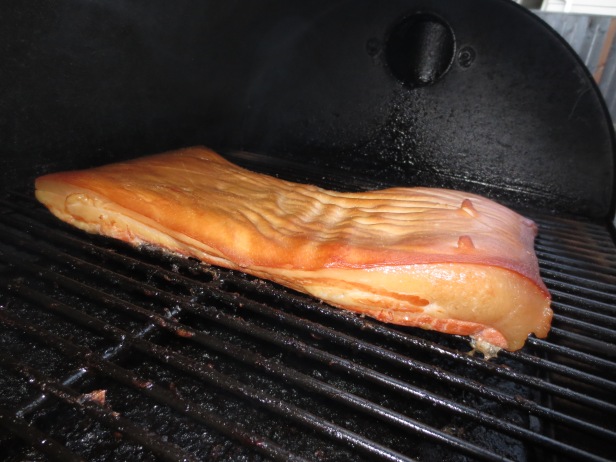 I had tried to smoke ours alongside a brisket that I was cooking.  The brisket was smoking at 180-200 degrees and that was simply too hot for the bacon slabs, so they ended up partially “cooked” not just smoked.

Recall that I had removed the skin from 2 of the slabs.  I really don’t know what difference it makes…the flavor was the same on both.  The only thing I noticed was that the slab that cooked with the skin on, ended up staying skinny/thin.  Whereas the skin-off slab thickened up a bit:

But the other skin-off slabs had curled and warped while smoking, making it harder to slice into bacon strips.  The curling/warping was definitely undesirable.

I will say it was way easier to remove the skin after it was cooked (rather than before).

Cut the slab into bacon slices- whatever thickness you desire!

We froze all of ours, except for a small amount to cook right away as a sampler.  Oh my gosh it was absolutely delicious!  I didn’t get a chance to take any pictures because we all ate it so fast!

Our new bacon cooking method- in the oven!  It’s super easy, cleans up quick, and doesn’t stink up the house or leave bacon splatters all over the place!  Simply line a cookie sheet with foil, making a slight lip along every edge.  Lay the bacon slices on the foil.  Put the tray into the oven (cold oven), turn the oven on to 400-degrees and set a timer for 18 minutes.  Perfection every time.  Immediately remove the bacon from the cookie sheet and set on paper towels to drain.  To clean up, simply wait for the bacon grease to harden on the foil, then fold the foil up and toss.  Your cookie sheet should still be clean (of course you will wash it anyway, right?).  Easy!

Here’s a link to the website that inspired us:  http://coolmaterial.com/roundup/how-to-make-bacon-from-scratch/

2 thoughts on “Making Bacon from “scratch””