Some of this will be duplicated on our 2011 Addition Blog page, at least the portion related to our remodeling project.  If you need the password to that blog page, let me know!

My cold was significantly better by Friday morning.  There was a half day of school on Thursday and no school on Friday and Trevor was hoping to have a friend spend one of those nights here.  Since Friday is my lightest daycare day of the week, Terrell came over around lunch time to spend the night and most of the next day. We had grilled chicken and homemade french fries for dinner- both big hits in this house and Terrell ate his fair share.

Jim decided on Friday that instead of running on the treadmill every night after work, he would instead start doing some of our major yard projects as exercise, so he fired up the chainsaw about 4:30 pm and started cutting down the (half-dead) cherry tree. 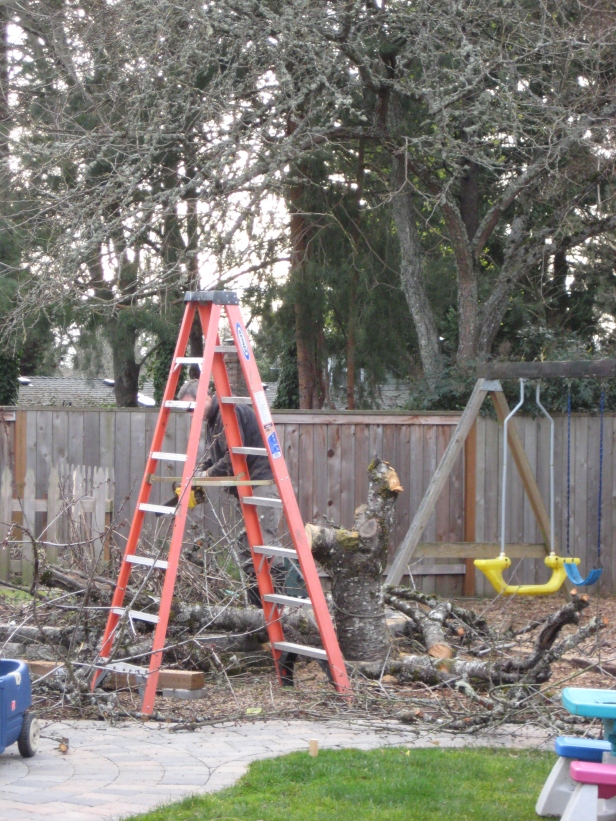 He left it about three feet above ground so that we can hook up a tractor or winch to it and pull it out.  He started digging around the stump, but it was getting too dark, so he spent the rest of his time hauling our retaining wall blocks away from the side yard and stacking them along the back fence (temporary location, which may mean “months” so they needed to look nice).

I’m not sure what the long term plan is for those….find another place in the yard to use them, or sell them, or ???

Dinner was late, and after dinner Jim wanted to watch some of the earthquake and tsunami news coverage (I had recorded the 7-9am news hours).  Unfortunately he fell asleep.  Since I had seen enough coverage, I used that time to finish reading a book.

Brooke was snuggling with Jim and had fallen asleep on him and when I got her up to put her to bed I noticed her rash was super vibrant and her cheeks were very red and puffy.  Another dose of Benedryl (it was 10pm) and I put her to bed.

Saturday morning her rash was about the same as bedtime the night before, super puffy and deep in color.  Not any better.  Ugh.  I decided we should take her in to Urgent Care and see what they had to say since it appeared to be getting worse, but we’d wait until after breakfast.  We had bacon, eggs and donuts- a treat since we had an overnight guest and last weekend we had blueberry pancakes and I didn’t want to serve that twice in a row (yep, same kid spent the night last Friday night, too!).

Sometime after breakfast we saw that Brooke’s rash had calmed down and lost a lot of the deep color so it didn’t look any worse than it had Friday afternoon.  I figured maybe when she gets hot (sleeping, snuggling) it makes the rash look worse.  I remember that happening to me back when I had a rash from taking the same medication when I had mono.

Jim spent more time in the yard that morning.  He moved the rest of the retaining wall blocks, dug out the garden sprinkler lines, dug out around the stump some more, cut the roots, and was shocked that the stump won’t even budge after all that.  Hmm….seems we’ll need heavy equipment to pull it out.  Eek.

I had a couple errands to run and one of those included a trip to the Hillsboro Library.  The boys wanted to join me, so Jim suggested we take the pop/beer cans back to the store, too.  I offered to let the boys keep some of the deposit money for themselves if they helped.  It ended up being me, Trevor, Terrell and Riley heading out.  First stop was Terrell’s house so he could have his parents fill out a library card application.  I hadn’t seen where he lived yet, nor met his mom or his siblings (I’d only met his father), so that was a dual-purpose visit as far as I was concerned!

Next stop was the library.  We probably spent over a half-hour there, the kids were looking for specific types of books and asked the librarian to show them where they could find them, and they each ended up checking out 2 or 3 books apiece.  I was proud of them for not being shy and taking the initiative to ask for help.

As we walked out the kids commented that they really enjoyed being there and want to do this again …and Terrell said the next time we go we need to take him with us!  Books are due back April 2nd, so I’m thinking maybe we’ll go back Saturday the 26th.   There’s a cafe in the foyer that sells donut holes 12 for $1.00, so I’ll treat the kids to donut holes next time.

Next stop was Target to do some returns and pick up a couple sale items, and get more Benedryl for Brooke.  The pharmacist suggested I take her back to the doctor since the rash wasn’t getting better- she thought it should be significantly better by now.  I was all geared up to take her in, but when I got home I was pleased to find her rash was looking better.  Still highly visible, but not as puffy or as vibrant.

Google research came back with this being normal.  After all, it takes 6 days of compounding doses of Amoxycillin before there’s enough in the system for the allergic reaction to appear, it would take several days to get that amount out of the system for the reaction to disappear.  Even with Benedryl.  The doctor had also told Jim it would take about 72 hours for it to go away.  So we decided there probably was no real need to take her back in.

We had dinner plans for Joe’s Crab Shack (never been before- we were going for someone’s birthday) and Brooke badly wanted to wear a dress (short sleeved), but I was hesitant to have her show too much skin for fear the patrons would think we were taking a measle-ridden kid out to dinner to infect the town!  (There is a case of measles floating around the Vancouver area right now.)  After much arguing and tears, she finally agreed to wear a long sleeve shirt and tights under her dress.  Whew!

Dinner was good.  I had “The Big Hook Up” which was a platter of fried oysters, fried snapper, coconut shrimp, balls of fire (crab, shrimp, cheese & jalepeno balls), crab-stuffed shrimp and hushpuppies.  It was gooooood.  I was fulllllll.

Late to bed that night.  Sunday morning Brooke woke up looking WORSE again.  Bright red and puffy.  Her legs were more red than white (thigh area) and her lips were even swollen.  I was all set to take her to Urgent Care, but again we decided to wait a couple hours to see if it calmed down again.  Upon closer inspection I could see that there were actually fewer spots so maybe she WAS getting better?

Jim and I spent the morning debating yard design.  I had drawn out several designs on Saturday, primarily to determine compost pile and shed placement, which then showed us how much side yard space is left over.  So we settled on the shed placement and started talking about the process of moving the shed.

We also spent about 2 hours deliberating patio designs.  I won’t bore you with all the arguments and points on each idea, but as it stands now, Jim has decided he wants to move the circle patio from it’s current location to across the yard where the fountain is.  (See our 2011 Addition blog for previous posts on this topic).

Jim decided HE would just do the job himself as part of his evening exercise for free!  He doesn’t care about the weather- he’ll work outside rain and shine, and like I mentioned earlier- it’s exercise!

So the decision was made, we went out to the backyard to locate the center spot for the circle, then I came inside and posted the fountain on Craigslist (for free) and 20 minutes later some guy came out to pick it up!  That was an ordeal in itself because it was much heavier than Jim remembered, so I had to recruit neighbors to come help carry it out to the guy’s truck!  (Thanks John, Josh, Jill, Dwayne and Dawna’s nephew!)

Next on the agenda: Trevor and I headed out at 3pm to run to Sears to pick up my new glasses, and he had soccer practice at 4:30 at a school near Washington Square.  We had to run into Bi-Mart first to pick up a can of marking paint (for spraying patio placement markings in the yard).  While we were in there, a massive rainstorm hit with crazy winds, insane amounts of water dumping out of the sky.  Trevor and I stood there and watched for any type of break before making a (literal) run back to the car.  I’ve never seen anything like it!

When we got to Washington Square I pulled into the parking garage (I always like to park on the 3rd floor right outside the Sears entrance- their Optical Department is right there), but everyone else wanted to park there for shelter so it was a big cluster of slow moving (or not moving) cars all waiting for spots.  We pulled right back out and figured we’d park outdoors and brave the rain.  No problem!

I got my glasses and then checked email from my phone, just in case soccer practice was canceled, and yes! it was canceled!  So we headed home.

Nothing exciting to report after that, I suppose.  Trevor slept most of the day, which was odd.  He took a three hour nap after breakfast, and when we came home from the mall he headed straight for the couch and fell asleep again!  Bedtime was at a normal time for all of us, despite the change to daylight savings.  I was hoping to go to bed earlier.  Not so lucky.

We are looking forward to the longer days though- especially since we have so much outside work to do!