Oh, they can be tricky.  I have always been adamantly against painting brick, but now I think my attitude might be changing.  I think brick can look very dated.  Especially in the case of our 1973 fireplace.

I really dislike our fireplace. For one, it’s so blah.  For two, it’s EIGHT FEET WIDE.  It is totally the focus of that room.  There’s no way around it.  But I really LOVE the look of the brick’s themselves- the variety of colors, texture, etc. 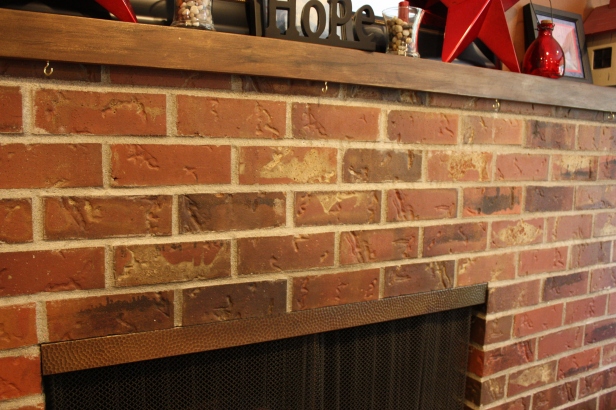 I would hate to cover that up.  And once you paint a brick, there’s no “unpainting” it.  It’s permanent.

Our Living Room has been so “blah” for years, it’s time to give it a look.  Something modern, something clean and crisp. Something with WOW factor.  But it has to be functional, and keep in mind we do run a daycare out of our home.  I want storage.  I like dark espresso wood.  I’m not a “bright and white” kind of person when it comes to home decorating.

Here’s some detail of our fireplace.  One of the things that bothers me, is that the opening is not centered.  3.5 bricks on the left side, 4 solid bricks on the right side.  Yep, we’re 4″ off center.  Whatever, I can deal with that.  I have been for 12 years!

OK, here it is.   Our Living Room as it sits today.  Note the ginormous fireplace? 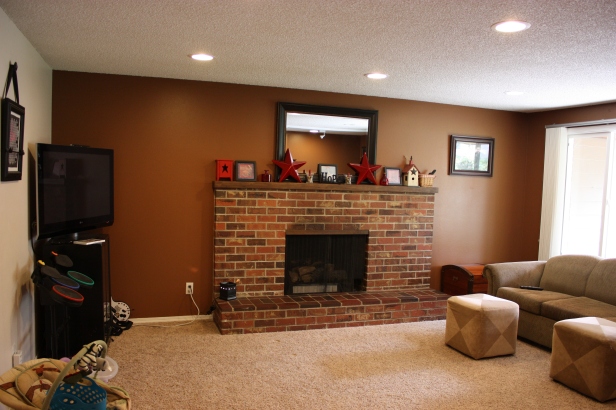 And here’s how it looked several years ago when it was a Game Room:

And prior to that it was an unused living room:

But see how the fireplace is THERE in every picture as a major focal point?

That brings me back to my question.  Do we paint it?  Or does it need a major overhaul?  Tearing it out is NOT an option.  I also do not want to cover it with tile, as I think that look is a little Y2K-ish (sorry everyone with tile wrapped fireplaces).

So let’s look at painting.

These people painted theirs and it I think it looks better.

These people did, too….and uck- looks like a snow wall from the Abominable Snowman’s house (yes! I spelled it right!)

Here are some more examples of nice looking painted fireplaces.

And these look nice, don’t they?

Here’s an example of someone who covered her fireplace with plaster– although they were no longer using the fireplace as a fireplace.

I kind of like THIS idea– covering the fireplace with Earthstone?  But again, MAJOR FOCAL POINT OF THE ROOM problem.

I kind of like this idea- making a wooden mantle to frame the fireplace opening.  I don’t think it would quite work the same with ours, but it’s an idea.

I also like the wraparound wood casing look of this one…thinking we can build some permanent sheving on the wide hearth this way, too.  What I also like about this one is that they left it brick colored (although you can tell it’s not the same brick). 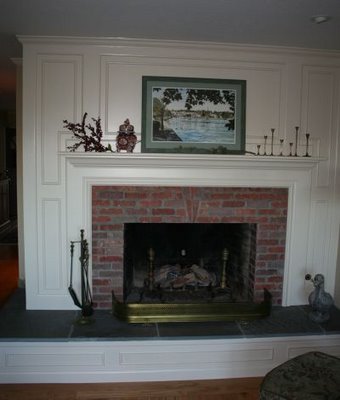 Here’s another good example– and her hearth is like ours, so it’s more do-able, right?

And look at these wraps…

Now we’re talking- I LOVE that one!
Or this one….
BEFORE:

Except I don’t want mine THAT fancy.

Hmmmm….maybe I’ll push the makeover of our Living Room to be MUCH SOONER rather than later!