Well the kid turns 11 today!  We had his birthday party here at the house on Saturday. Well, part of it was at our house.  We started off the party by inviting all the kids over at 1:30 in the afternoon.  They came in, got their sleeping bags set up, picked out a box of candy, then we loaded into the 2 vehicles and headed off to the movie theater.  Trevor had invited all his friends to go see the new movie, “Vampires Suck”.  It’s a mockery of the Twilight Saga.  It was actually quite funny, but definitely PG-13.

After the movie, we hung out in the parking lot for about 5 minutes watching some of the Hillsboro Air Show jets flying overhead.  Then Jim took his carload back home with him, and the rest of the gang went with me to go pick up pizza for dinner.  Trevor’s favorite pizza:  Little Caesars.  Uck.

Back home- pizza and soda for everyone!  Boys are easy to keep entertained.  Just throw a few balls into the yard and they’ll play for hours.  Our yard was too small for a bunch of 11-year olds to play soccer, and too small to play soccer AND football (our group was divided on these two sports it seems!).  So we loaded up the cars again, and took the gang up to Butternut Creek to enjoy the expansive open fields.  They played kickball, a bit of football, then went to the  undercover area to play wallball.  When they all climbed up the monkey bars I decided this would be a great photo opportunity for a group shot! 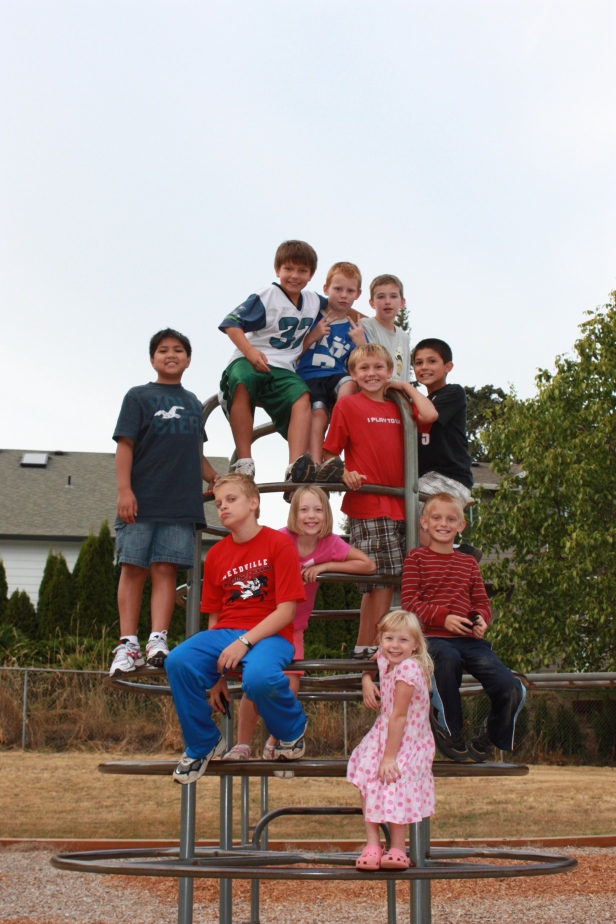 Of course, then it turned into “I bet I can jump off the top!”  So we had a round of nail-biting excitement.

Trevor was the first one to jump off the top, over and over again.  Not all the boys tried it.  Thankfully.

Back home…they found the bicycles.  They rode those round and round and round.  Then they grabbed the balls AND the bikes and made up their own fun game of bicycle dodge-ball, which didn’t last long for obvious reasons. 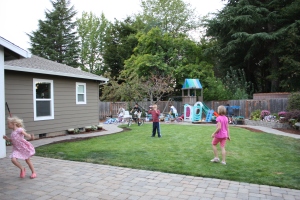 They set up stop signs and detours.  Had “police” who could pull you over and take your bike.  There were 9 riders and only 6 bicycles… and they did a good job of “sharing”.

They played outside until just after 10pm.  Crazy boys.

And we had cake, of course.

Trevor even lit the candle himself.

The rest of the night was your standard slumber party, with a bunch of ghost story telling, and warnings from me to keep the noise down.   =o)