I haven’t posted one of these for a while, but a lot happened this weekend and I’m going to want to reference back to some of it down the road….

First priority of the weekend…..

Landscaping the 4100 house.  Jim and I had gone over there a couple weeks prior with a weed burner (propane torch, nicknamed “flame thrower) and burned off all the dead brown weeds that the renters had killed off with Round-Up.  We followed that with a spraying of the living weeds, using some sort of weed killer and ground sterilizer.  We waited about a week and went back with the flame thrower again to burn up what was killed with the spray.  That left us with basically bare dirt and virtually no weeds.

On Friday I had a FULL unit of red hemlock delivered to the house.  That night, Jim, Trevor and I went over after work (while the girls were at karate) and lay some ground cover fabric (didn’t quite take a full roll) and started covering the yard with fresh barkdust.  Surprisingly, it only took us about 1.5 hours and we only used 2/3 of the load.

Here she is all finished:

(The house is being prepped to paint, excuse the polka dots)

We loaded the leftover barkdust into our utility trailer and brought it home.  We weren’t sure if we were going to use it at our house, or take it over to the 5745 house.  We decided since we had an upcoming party we should spread it at OUR house.  It was about 7:30pm and there was no reason to put it off until the next day- it’s light past 9:30 anyway.

We had enough to do both the front and the back (since our backyard is all gravel, pavers and flower beds, there really isn’t much barkdust needed). 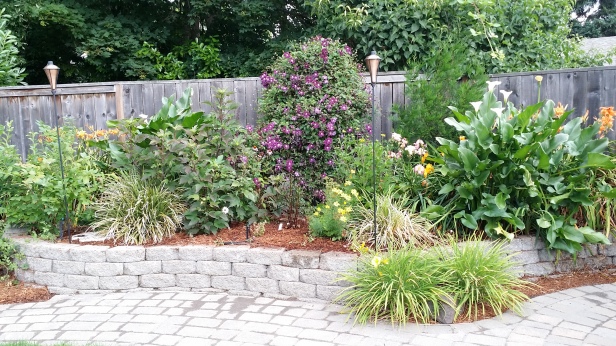 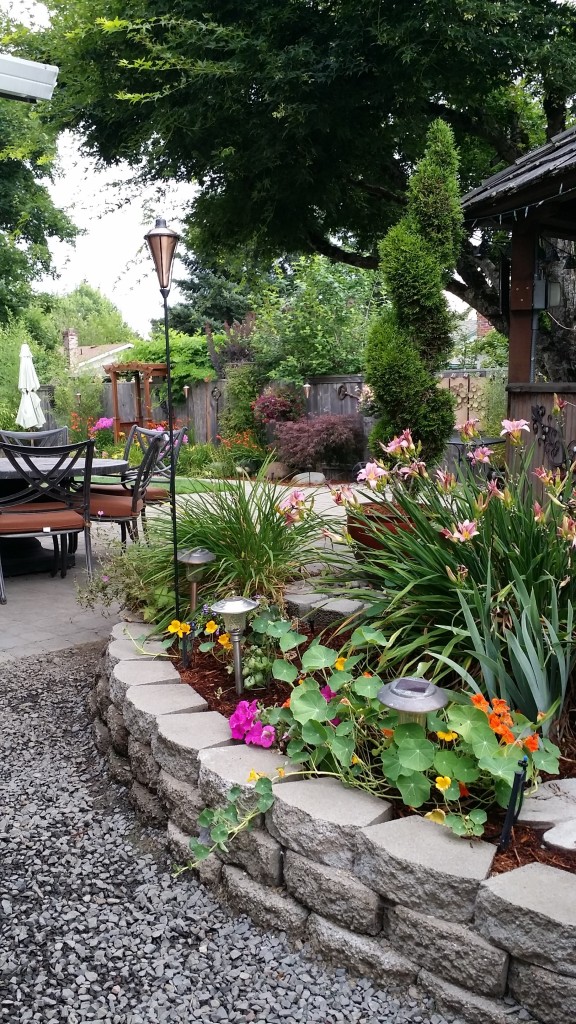 I love that our yard is so maintenance free.  I guess it’s not really maintenance free, because we do pull weeds, spray weeds, fertilize and mow the lawn, and deadhead flowers…..but that’s all quick and easy stuff.  It’s not like we spend hours in our yard every weekend.  It just LOOKS like we do!  All the plants are perennials, so they just grow back every year.  Easy peasy!

Saturday morning Jim and I went for a run at Rood Bridge park (3 laps = 3.64 miles) then came home and showered and went to Brooke’s dance camp recital.  Our community rec center had hosted a two-week long dance camp for the kids and Brooke enjoyed the daily classes.  Here’s a video of the routines:

After that we came back to our place, grabbed the utility trailer and headed to my parents place to visit with my cousin’s wife and family for a bit before they headed back home to Seattle. After the visit we took my parents’ patio tables and chairs back to our place for their annual deep cleaning/scrubbing so we can borrow them for our Summer BBQ.  And that’s how the rest of the morning and early afternoon was spent.

Reference Point #2: Last year we used the pressure washer to clean the tables which took a lot of time and made a lot of wet mess.  This year I sprayed 50% ammonia, let it soak for about a minute, then hosed it off.  They got pretty clean!  The stubborn areas we scrubbed with brillo pads.  The really stubborn areas were bleached (in a separate area of the yard and after the ammonia was completely rinsed off).  This was by far the fastest cleaning job we had done yet!

At 1pm the girls and I had to leave for Forest Grove for a martial arts demo team performance at the high school- for another Relay for Life event.  We had to be there by 1:30, and we were- and we were standing out in the 96-degree heat (found some shade fortunately) and finally just after 2pm the girls got to perform (in the blazing sun).

It was HAWT.  Hot hot hot.  We stopped at 7-11 for slurpees and came home exhausted and hot.

A quick bite to eat and we were back outside to work.   The day’s focus was party prep.  We needed to park all the daycare riding toys out of sight and deadhead plants, pull weeds, set up the tiki-torches, umbrellas, OUR patio chairs were pulled out of storage and cleaned up, and then we spread sand into the pavers again (this has to be done every couple years).  Jim also took apart the Traeger for it’s super deep cleaning.  It was a full day of work….we came in just after 7pm with plans to watch a movie, but instead I fell asleep on the couch!

Sunday we slept in a little later, getting up at 7am instead of 6am.  Trevor had a friend spend the night so they could go to the skate park early, so I took them (dropped them off) around 7:15.  Jim and I ate a light breakfast, then headed to the skate park at 8:15 to watch the boys (they wanted some practice time and then wanted me to come film and watch their tricks) and go for a run.   I mapped out a 3-mile run and Jim and I ended up running 3.48 miles.  That last mile was SO. HARD.  But I made it!  (Later found out it was a mostly uphill route!  Yikes!)

Here’s the video footage of the boys with their scooters.

Back at home, I made breakfast while Jim and Brooke went to Woodco to buy a trailer load full of cedar chips for the playground.  $76.00 you-haul.  The trailer fit about 2 units.

We got the cedar chips spread and decided we really needed another trailer load- so they headed out again.  Meanwhile it was thundering and lightning the whole time- freaky cool!

Reference Point #3: $76 for a trailer load full of cedar chips, about 2 yards.  We need 4 yards to fill the playground.

We took a break and watched the neighbors excavate their front yard.  They had a huge tree taken down and had a 2-3′ tall berm that needed to be removed.  It was full of tree roots so they brought in some heavy equipment to do the job.

By then it was after 2pm.  We came in and showered, took the trailer back to my parents to store for the week (because we parked all the daycare toys in the trailer parking spot in our yard!).  We stopped at an Open House we’ve been wanting to see- a house on Rosedale.  It has about an acre of property, a shop, and the house was listed at over 2,000 SF.  After seeing the inside, even if it was gifted to me I’d never LIVE there.  Horrible floor plan.

Anyway, Jim and I continued on to Costco (stocking up on party supplies), then Best Buy (to check out bluetooth stereo options) then came home.

I tried a fried chicken recipe on the Traeger.  It was a fail.  The oil wasn’t hot enough.  Jim and Riley said it was still good though and want me to try it again, so we’ll do that some day down the road.  We needed to test the Traeger because it’s been “ERR”oring out lately and we have a brisket and burgers to cook on it next weekend- it will be running for 20 hours straight- it HAS to work!

After we got our Sunday chores done and everything cleaned up, we sat down to watch a movie.  Vampire Academy.  I had read the books, so was excited to see how the movie was made.  It was OK.  I’m thinking Riley might want to read the books now that she’s seen the movie.

Anyway…. that wraps up our weekend events!