This is our first full weekend home since Disneyland, and man it seems like we just never have enough time!

Friday night we relaxed and had a friend over, ate pizza, drank beers….just enjoyed some R&R after the work week.

Saturday morning we slept in (getting up around 8am) and the guys (Jim and Trevor) were supposed to be at my parents’ place at 9am to help my dad empty out his pole barn.  I quickly assembled a high protein breakfast of sausage, scrambled eggs mixed with bacon, salsa, pepperjack cheese and avocado….and toast.   The guys headed out, taking Brooke with them (she wanted to help Grandma), and Riley and I headed out the door to do some shopping at Toys R Us.

My playpens are all 13 years old and not looking their best after being used on a daily basis for daycare.  There’s only so many times you can take them in the backyard and soak them with bleach and spray them.  Besides, the mattresses were all curved and bent from being used so much.  It was definitely time to replace them.   All of them.  I’ve just been waiting for the right sale to come along.

Thursday I received a 20% off coupon for Toys R Us so figured now would be a good time.   I shopped their website first…. I looked at the cheaper ones ($69 range) and the next bump up was $99 but they had more options, better colors and better style.

At the store, the $69 model I was originally there for wasn’t as cute in person, and had a solid cream colored mattress pad. 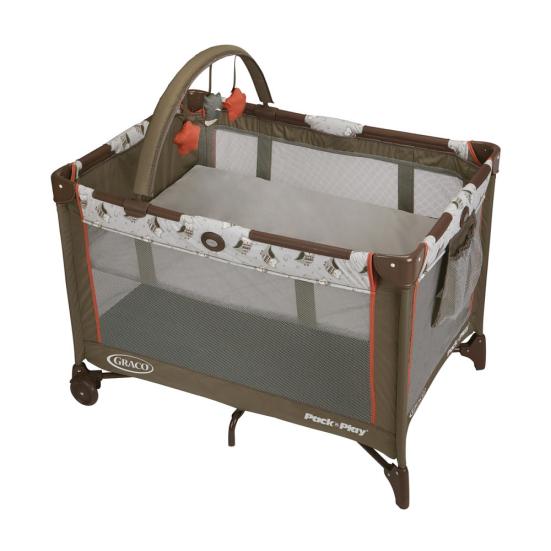 What idiot designs an infant/toddler bed with a solid cream colored mattress?   Don’t they know that kids spit up, drool, snot, and sometimes diapers leak in these things?

But, it was $69 and I could use the coupon, making it just $55.   I wanted to replace my sheets, too, so figured if I found some coordinating patterened sheets, that would make the cream color issue a non-issue.

The $99 model was on sale for $79, which meant I couldn’t use my 20% coupon (it was only valid on regular price items).  Dang!  I guess it’s the price it would be if I were able to use that coupon, but still….what’s the point of having a coupon when you can’t use it!?

I knew I needed two, maybe three, but at least two, and I couldn’t justify $25 more for a “cuter” model, especially when I didn’t need the newborn/changing table top…..that’s just something that needs to be stored!   BUT, I really wanted the cuter model, and it was on sale…..so I just chose one of each and loaded them in the cart- along with lots more daycare related items- and headed up to the cash register.

The associate saw my large purchase and suggested I open a Toys’R’Us credit card to save an extra 15%…..which I did…..so I went back and grabbed another of the $79 models.  So that’s three new pack’n’plays for $182!  All three have wheels and bassinet tops, too!  Not that I need 3 bassinet tops at the same time….usually only one.  Only once have I needed two!

Anyway- whew!  That task was done.  (In the past 12 months I’ve replaced all my highchairs, napmats- opting to buy nap cots instead, and now replacing all the pack’n’plays….yow$a!!)

We also stopped at the pet store for dog food….surprised to find out that PetSmart accepts Petco coupons, so I was able to save my 5-bucks.   It was getting warm outside and we were thirsty (and I didn’t have any coffee that morning except for a yucky day-old leftover mug full) so we stopped at McDonald’s for an iced mocha for me and a soda for Riley.

We came home to unload the car, then checked in with my parents to see if the guys needed help….they didn’t…..so we left again (this time taking all my old Pack’n’Plays and putting a FREE sign on them and dropping them at the corner of Rosa- one car pulled up while we were there and grabbed one, another car stopped as we pulled away, and when we drove by 30 minutes later all three were gone.  This was easier than holding onto them for a garage sale or taking them to Goodwill.

Anyway, the next stop was to get a new haircut…..going shorter again!

….then we walked next door to the Aloha Library.  I only had Riley with me, but we got library cards for me and both girls, signed up both girls for the Summer Reading program, and picked out a book for Brooke (along with some DVD’s and a book for Riley).

We got to my parents’ place, everyone was hungry- Dad was willing to take a break and go to the Cruise In Diner for lunch, but I knew that Jim wanted to just hurry up and get done with the project- we had plans for the afternoon and evening!  I volunteered to drive to Wendy’s and return with chicken sandwiches, burgers and Frostees.  Turns out 12 sandwiches isn’t enough for 7 people.  Next time I need to get 14 or 15.

After lunch, I captured some photos and video of Trevor driving the forklift (and Riley talking Grandma into letting her drive the Polaris Ranger around!)

Here’s a link to the video: http://youtu.be/balKodxAOvM

The girls and I headed for home (the guys still had work to do).

Our HOA Rec Center was offering their annual “Pop in for a Popsicle” Swim Lesson Sign-up, and the grand opening of the pool for the summer season.  I promised the girls I’d take them, as it’s become a yearly challenge for the girls to pass the swim test on the FIRST DAY the pool is open.  (If they pass the test, Riley can take Brooke to the pool.  If they don’t pass, the girls need Trevor or myself to take them.  Riley being age 10 can also go the pool by herself if she wants (Brooke can’t until she is 10).

It sure is nice that the kids can take advantage of the pool every summer!

Guess what…. they passed!   Here’s a link to the video: http://youtu.be/_iLYyYsmy8U

Back at home, quick showers for everyone and then we were out the door to see the Ernie Reyes’ Martial Arts Spectacular event hosted by the girls’ karate school.  It was a great show, but ran about an hour longer than we anticipated.   They played some great music with their video tributes and I Shazam’d them to save for my future video projects!

We had planned to go out to dinner after (planning on a 6:30 finale), and we were so hungry when we finally were out of there.  It was 8:00 when we set foot in “Five Guys Burgers and Fries”.  But oh their food is soooooo good.

but never posted that or shared it (until now!).

Next I designed a new yard sign for my daycare…

but still need to order them.

I worked on cleaning out the corners of the office and pantry, putting stuff into a garage sale box, putting those boxes up in the attic, then tackled cleaning out the back corner of the playroom, I installed wall straps for the nap cots (so they won’t tip over on somebody) and finished up other little random tasks.  Washed bedding, la de da de da, you know.  Oh, and got the kids’ Summer Education program all figured out.  Or so I thought.  Refer to this post.

When Jim got home (around 2:30), we hung out for about an hour discussing dinner plans and afternoon activities, then I had to leave to take Trevor to a graduation party at one of his (girl) friend’s homes, before returning home I stopped at Cash & Carry to get a tri-tip and pork loin to cook on Monday (one or the other, not both).   Wanting to grill something that night, I also picked up some butterflied shrimp and hot wings.  Turns out the shrimp needed to be deep fried, not grilled.

Back at home we cracked open some beers, fired up the grill, brought the deep fry skillet outside and plugged it in (lol!), and hung some artwork in our yard- things we’d picked up at Costco or garage sales over the past month. 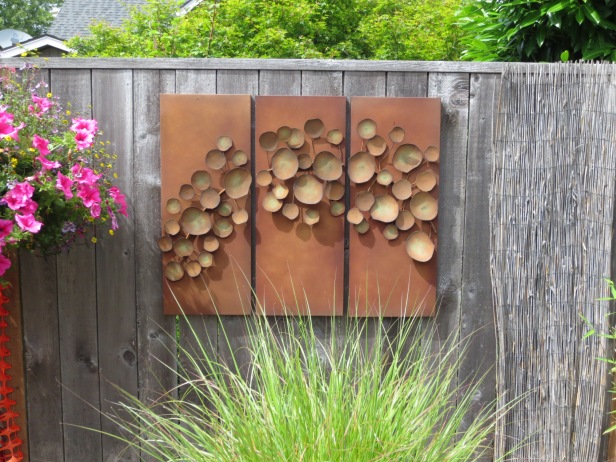 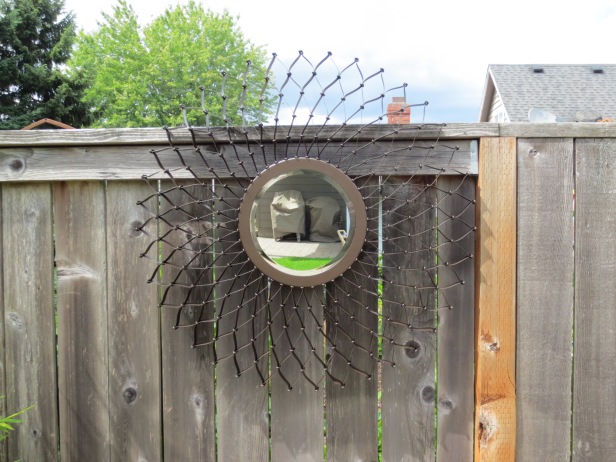 The tiki head was a garage sale find that we HAD to have!  We hung it in the area reserved for “Jim’s Tent of Terror” when we have our Summer BBQ party… lol!  Now we’re looking for skulls and other tiki/voodoo/terror type items to use for the tent.

We enjoyed our dinner, sat at the back patio table, and then got a super late start on our Sunday Chores (Sunday housecleaning- prepping for the daycare week).  I had an interview scheduled for Monday morning, so wanted to do an extra good job of cleaning.   We needed to stay up until 10:00 anyway, to pick up Trevor from his friend’s party, which surprisingly wasn’t hard to do!  (staying up late that is)

And that pretty much wraps up another busy weekend at the Buckley household.  Unless you want to count Monday- Jim had the day off and spent a few hours prepping the house for pressure washing, then messing with the pressure washer because it wasn’t working right….then finally got around to pressure washing the entire house. When that was done he tackled the paver patio.  You know how big our patio is…..and the paver path that surrounds our yard……well, he only got about about 7 rows done before he had to call it quits for the night.  It’s going to be a big, time consuming, wet and messy job!

We stll have a LOT more to clean.   And of course there’s our still unfinished projects- like painting the front door!  Geesh- I just need a full day at home without kids (and a dry and warmish day, too).  And that fancy schmancy water feature we put in?  UGH, we can’t keep the basin full!  There’s some re-do with that project that will take at least a full day to fix.

And that’s what weekends are for, right?

See you next weekend!