When we serve brisket to our guests….it’s Jim’s deal- he buys it, he trims it, he rubs it, he bar-be-cues it (overnight! and all day), he watches it like a hawk and takes it off the grill and wraps it and cuts it up and plates it- and, and, it’s ALLLLL Jim.

‘Cept for this time.

It was SUPPOSED to be all him this time, don’t let me take that away from him.  But here’s how it all went down:

Jim brought home the brisket on Wednesday- (strapped to the back of his motorcycle- hee hee! Or maybe it was in his backpack?  Dunno.  Didn’t see “how” it got here, just know that he was wearing his motorcycle gear and carrying a brisket into the house).  He spent a little extra for a “Choice” cut of meat.  He put it in the garage fridge with a plan of starting to smoke it on Friday at 5:00.  (Jim is usually home from work at 3:30 or so).

Guess not.  Jim ended up having to work until 5:00 and then going to an offsite event after work….so that meant it would be ME in charge of getting the meat going.

First step- cutting out the deep fat pockets and trimming the rest of the fat to 1/4″ thickness.  I have to say, I’m glad I actually did this job because I’ve previously tried to trim a brisket- cutting the point away from the flat- very unsuccessfully.  But carving out the fat pockets on this cut I was able to clearly see how the point attaches to the flat- so next time I make pastrami I’ll know how to separate the two pieces!  Yay!

But have you ever seen the pile of lard/fat trimmed off a brisket?  I kid you not- it filled a gallon ziplock bag.  YUCK.

Back to the main point- I had to trim the meat, rub it down with olive oil and then season it with some Sweet BBQ Rub.  I re-read the directions Jim gave me (which said to refer to page 5 in the Traeger cookbook) and both recipes on that page said to start the brisket on “Medium” for 3-6 hours then finish cooking on “Smoke”.  So at 5pm I put the 15 pound brisket on the grill set to “Medium” and walked out the door.  I had grocery shopping to do, football camp to go to, kids to pick up and bring home, yada yada.

Got home at 8:30.  Jim had just gotten home (he had an after work event).  And oopsie….I was supposed to follow the “Alternative Cooking Method- cook at “Smoke” setting for the full length of time”.  So the meat was already over 100 degrees.  And we still needed it to cook for another 19 hours.  Ha!

Jim turned it down and we just figured it would be done a little early, no biggie, just cook it low and slow.

Jim had to get up at 4am to go to work.  (He drew the 4:30AM Saturday shift for the day of our party, which is better than any other Saturday shift because this way he’d be home before 2:00!).

I was planning on sleeping in until 7:30 or so (I usually get up at 5:15 so yes, 7:30 IS sleeping in) and as he’s getting ready for work I decide to roll over and look at the meat thermometer (we have a remote thermometer that alerts us when the meat is ready)……and….something isn’t right.

The temperature of the meat is below 100.  Well that’s weird.  Wasn’t the meat 100 when we went to bed?  How could the meat have cooled down?

I tell Jim what the thermometer reading says and tell him that I’ll go check on it.  After all, he has to go to work.  I slipped on a pair of shorts and headed outside- and, um, the Traeger grill temperature reading says 77.  But it’s running.  Must be out of pellets.  I lift the hopper lid and it’s still full of pellets, so THAT’S a problem.  I open the grill lid and reach my hand in and it feels a little…..not hot.  Not hot at all.  I turn the grill off.

So I go back inside, grab a tray to put the meat on, 2 pairs of tongs to grab it with (after all it’s 15 pounds of solid meat!), some oven mits, then realize there’s no table outside to put this stuff on so I put it all on the counter and go out to the garage and grab our 5′ plastic table and haul that through the house, set it up outside, go back inside to grab the tray of supplies, take them outside, then come back inside and announce to Jim that I’ll have to take the grill apart and see what’s going on.  “Bye honey, I love you, have a good day!  Muwah!”

I put on a robe then head outside to set up my work station.  I pull the meat off, pull the grill off, pull the drip pan off, pull the firepot cover off….all of it feeling quite cool…and to my NON delight the hopper has overflowed (overflown?) with pellets.  Well that’s weird.

I go back inside and grab a big bowl and a giant plastic spoon and go back outside and start scooping up all the unused pellets.  Then I realize this is a much bigger job than a spoon and bowl can handle…. so I go up into the attic (yes at 4:25AM) to get our Shop Vac down (the one we use solely for cleaning out our pellet stove) and get it put together and go back outside and suck up all the pellets.  And ash.  And clean the whole darn interior of the Traeger.

Although our patio has lights, I really can’t see well enough to make sure it’s all good…. so back inside to get a flashlight.  Back outside- turn the Traeger on to see if the pellets are feeding properly- and if the glow rod is getting hot (er, glowing).  I wait the obligatory 5 minutes for start-up and sure enough, it seems to be working.

So I shut her down and put the firepot cover back on, the drip pan back on, the grill back on, the meat back on, and turn it on again.  Wait the obligatory 5 minutes again….and yep, it’s working again.

But I can’t fall asleep.  About 15 minutes goes by and I decide I’d better check the meat temperature.  It doesn’t seem to be rising.  Hmmm….

Go back outside and look at the Trager temperature- it’s below 100 again.  DANG!  Why is this not working!  I turn it off.

Go back inside to put on my shorts and robe (hee hee- I really could care less at that point WHO saw me in my underwear outside at 4:55am on a SATURDAY morning).  I go back outside to take the Traeger all apart again.

Take the meat off, take the grill off (it’s HOT this time!!), take the drip pan off (it’s even hotter than the grill), take the firepot cover off (’bout burned me through my oven mits it was SUPER HOT).  Put all that stuff on the pavers instead of the plastic table because I was afraid I’d melt the table!

Look in the firepot and yep- there’s a build up of pellets NOT on fire.  Scoop ’em out away from the glow rod.

At this point I’m freaking out.  It’s 5:00AM.  I have no working BBQ.  I have no way to finish cooking our brisket.  And how am I going to cook all the burgers and dogs for our 50+ guests later this afternoon?  Dare I call Jim’s dad this early in the morning to see if I can pick up HIS Traeger to finish the job?  Should I not call him and just go pick it up?   Can I lift it and carry it and load it into the Expedition by myself? Why is this stupid thing not working right?

I spent the next 15 minutes Googling Traeger issues, brisket cooking issues, how to cook brisket in an oven, etc. etc.  Came to the conclusion that although the meat has had a few hour “pause” while cooking, it’s still OK and it shouldn’t affect the tenderness.  Worst case scenario I can finish it in the oven, it will still have the good smoke flavor since it’s been smoking for 12 hours already.  I also came to the conclusion that our Traeger simply can’t maintain a fire at “Smoke”.  Apparently this is not an uncommon thing and will result in a call to Traeger later this week…guess there’s a way to adjust the control panel setting to increase the temperature slightly.

SO, before I give up….maybe I should try a higher setting.

I go back outside, put the firepot cover back on (much cooler now thanks!), the drip pan, the grill, and fire it up- wait the obligatory 5 minutes- I see fire (yay!) so I put the meat on.  I turn the temp up to 225 since we’re now behind the game…

I guess I’m up for the day.  It’s 5:15, so why not?   I start planning out the rest of the day and try to decide what my next step will be.  I’m making lists and was thinking about making my coffee, but darn it- I’m really tired and really don’t want to be up this early!

So I went back outside to see the Traeger temperature- it was 225 like it should be- and it had been 15 minutes.  The meat temperature was already rising, too.  You know what?  I’m going BACK TO BED!

I woke up at 8:00- grill was working perfectly, the meat was heating up perfectly, life is gooood.  Crisis overted.

Supposedly- the best method is to take it off at 185-190 and wrap it and let it sit for at least an hour- up to 3 hours- during which time the internal temperature will actually rise another 5 degrees and this process causes the fat to melt through all the meat and moisten the meat so it’s extra tender and juicy.

The meat was done at 2:30 and I took it off the grill, wrapped it in foil, wrapped it in towels, set it in a cooler filled with towels and we let it “set” for the next 2 hours as the professionals recommend.

I’d say it worked- Jim sliced it all and I thought it was really good- a tad on the dry side but good flavor and really tender…and it was ALL GONE.

So here it is….MY masterpiece: 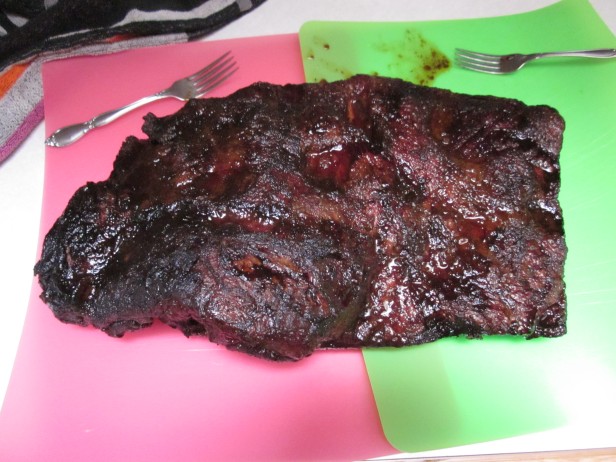