I’m a little slow on posting some things, I know.

Trevor graduated from Elementary School last week and will now be going to a Middle School next year!  Craziness! 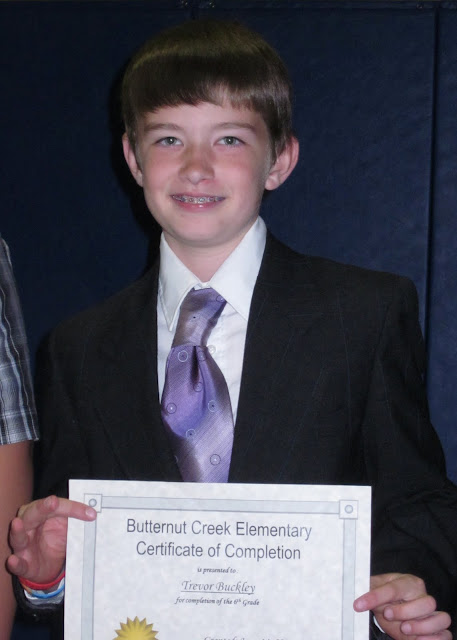 His grade had an end-of-year celebration which included a song that the kids mostly lip-synched to, it was lacking gusto that’s for sure! (I overheard a bunch of the kids saying afterwards that they were lip synching because they didn’t really want to sing it- and several kids just smiled through it and didn’t sing at all!) Much different than Brooke’s Kindergarten music performance.

Anyway- rather than loading the slideshow on the blog, here’s a link to my Picasa album:

Although I recorded the class singing, I’ll spare you…

…never mind.  Here it is.  You can feel free to stop watching it anytime during the musical piece because it’s a looooong song and there’s nothing special that happens in the video.  Just recorded the whole song, because, well, you don’t only record half a song, right?

Brooke’s Kindergarten Class also had an end of year celebration with a music performance.  Actually there were several songs sung.  I only took a couple pictures of her class up on stage and then one of Brooke just before we walked out of her classroom for the last time.

Above: Front row in the pink flowery dress with the pink athletic jacket and black tights/heels. I didn’t dress her.

Above: Back in the classroom before the class party.

And here’s the whole 10 minute musical performance by her class:

Riley’s grade didn’t do anything special.  I guess they only celebrate the first year in school and the last year!