What did I get myself into!!??

My dad sent me a picture of Minion Cupcakes on Facebook…. and they sure do look cute.  The next day, I’m sitting next to hubby on the couch and I’m browsing Pinterest…and run across this picture: 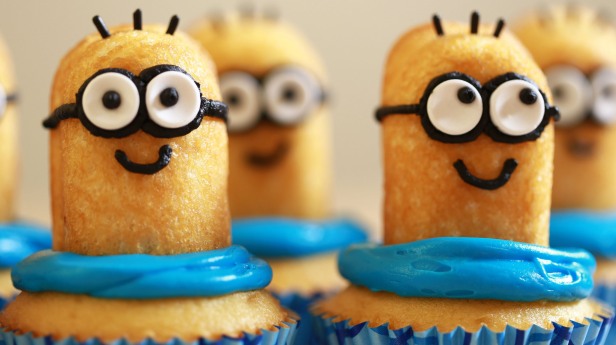 And I show it to him…..and what does he say?

“I have a work potluck next week, let’s make them!”

Doh.  Face-palm.  SMH.  Whatever modern lingo you want to use.

Sooooooooooo, after reading other blogs and watching YouTube videos, and getting a better understanding of what all is involved….I came up with a plan.

THIS is how WE did it….it’s really not THAT complicated.

*There’s several options for drawing the goggles and eyes/mouth….either regular black icing, or melted chocolate that can be piped, or using those super teeny skinny licorice strings.  There’s pros and cons for each.

1.  Bake the cupcakes- any flavor you want.  The good thing is you don’t want them very big, so only fill the muffin liners about 1/3 full, certainly less than half full.  You don’t want them overflowing the edges! 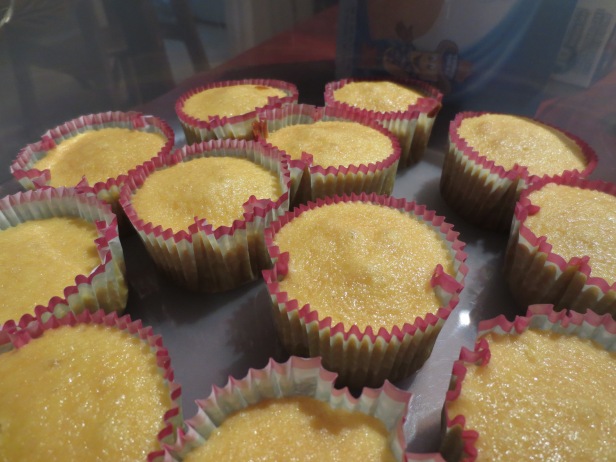 2. Sort out the smarties into whites only.  I also saved the lavender-gray ones just in case there weren’t enough whites: 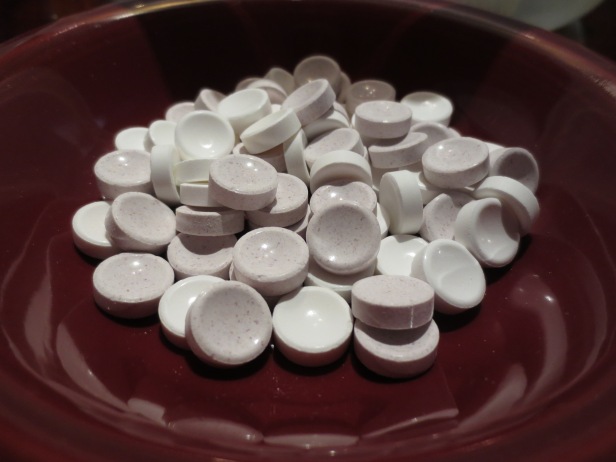 3.  Cut your Twinkies in half:

4.  Mix up some black icing.  My shortcut- I had some Betty Crocker chocolate frosting that I added black decorator tint to, making it suuuuuper dark: 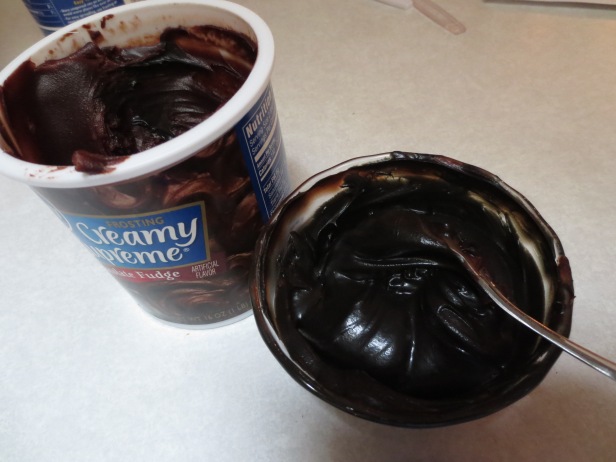 Oh- another tip…. when filling your icing bag, stand it up in a glass and wrap the edge over, this way when you put icing in the bag you still keep the top several inches dry and clean! 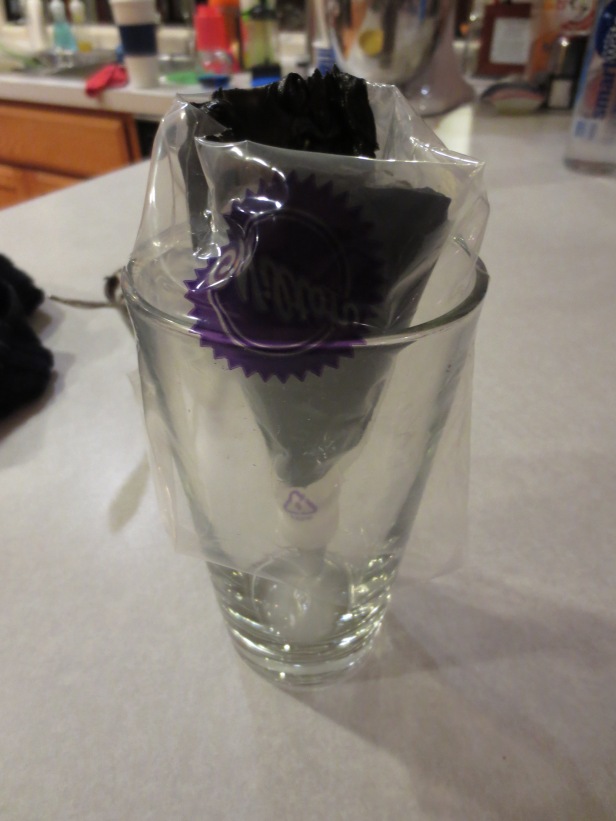 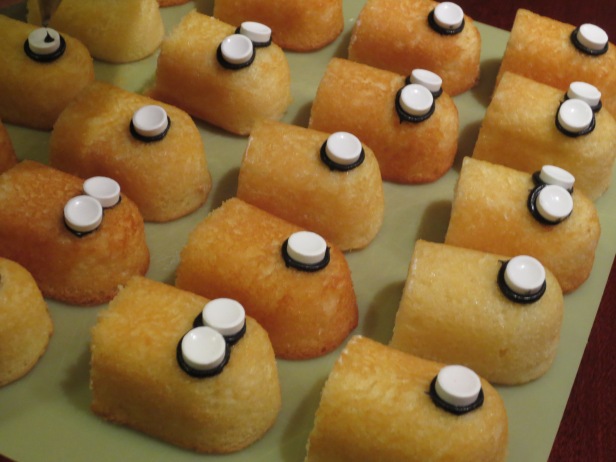 Yep, there’s a couple that needed more icing- easy enough to pull them off and reapply!

6.  Next is dotting the eyes and drawing smiles.  Jim did this all on his own.  We made some looking up, some cross-eyed, mostly smiles but a few surprise-round mouths or straight lines: 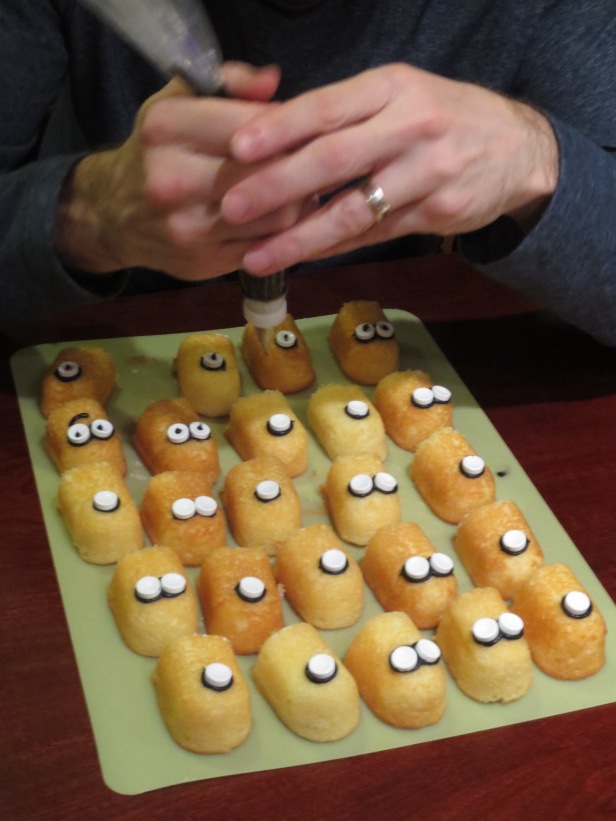 Let them set for a while.  This is where Royal Icing or a thick Buttercream icing would work better- it’s thicker and makes a better adhesive, and also doesn’t leave peaks (the eyeball dots looked like miniscule chocolate chips- they had little peaks.)

7. Frost the cupcakes with blue frosting.  Just a big ol’ swirl will do, no need to frost them super thoroughly, but you do need a hefty glob in the center to secure the Twinkie in place.  I cheated and used Betty Crocker vanilla frosting, and used my decorator tints to make it blue.  It was the perfect blue, too!

8.  Using a rotating stand, draw the goggle straps on the sides.  It was way easier to do it this way, instead of while they were laying down on their backs.  Sorry, no action shots of this process. 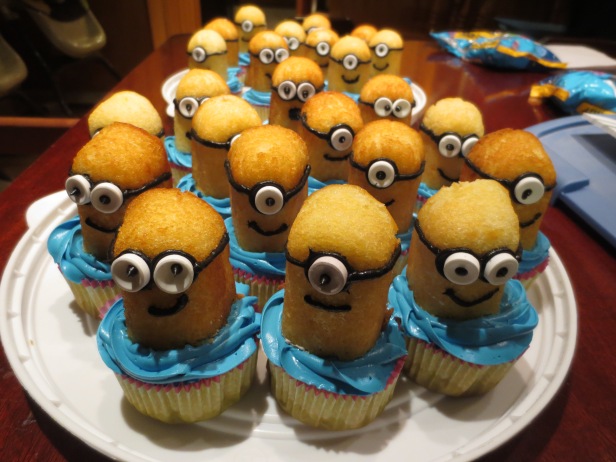 9.  The finishing touch?  HAIR!  Stick 3 chocolate sprinkles in the top of each Twinkie as hair: 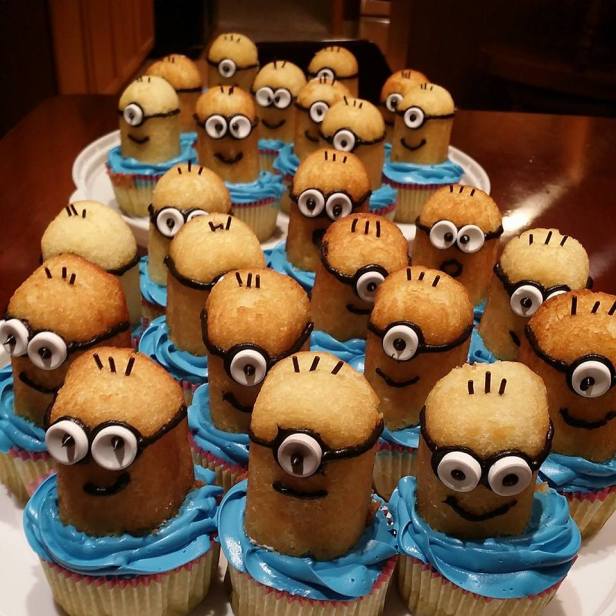 Ta da!!!  It was fun to make these- and they were a huge hit at the Potluck.  Here’s how Jim displayed them: 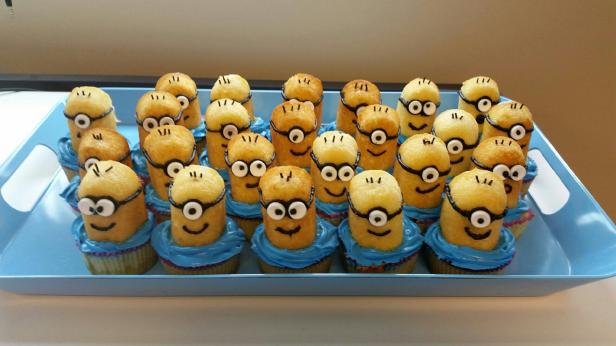