Friday night I was exhausted after work, and knew I would be, so had pre-chilled a bottle of champagne (aka “champs” and also my new drink of choice) to unwind. We popped the cork as soon as the last daycare kiddo left!

I was exhausted for a number of reasons.

#1. Not enough hours in the day to do what needs to be done. Or not enough energy to wisely use the alloted hours.

#2 Work: I’m not getting quiet time anymore due to a restless preschooler keeping the other kiddos awake, and an active toddler who upon waking climbs out of his playpen and either gets into mischief or wakes everyone else up.  Several days in a row of this can really burn someone out!

#3. Car Drama: Jim’s car had the oil light illuminate Thursday night (it’s not a constant light, it only illuminates when the car is turned off, which I find odd.  I’ve seen it three times, Jim only once, so we weren’t sure if it’s a sensor defect or an actual problem.  So when I got up Friday morning I decided I’d check the oil level and maybe it’s just low?  Well guess what….BMW 3-series cars DO NOT HAVE OIL DIPSTICKS. (Along with not having spare tires. Geesh.)   After reviewing the users manual, and reading online forums, I learned that there’s a computer display that you can awkwardly navigate to and the display showed we weren’t due for an oil change until September (yes, it actually says that).  There’s also a digital readout for the oil level, but the car has to be running and it can take up to 10 minutes to display.  I had intended to run the car during quiet time, but surprisingly never had 10 minutes to run the car in the driveway. 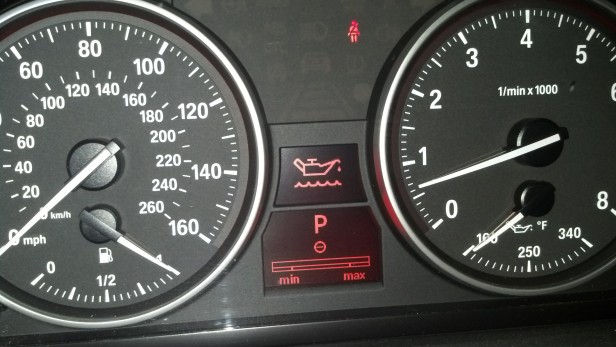 Anyway, I usually get my Friday evenings off…no more kitchen cleaning, no making dinner, I don’t even clean up after the daycare kids. I’m done.

Trevor was off with a friend, Brooke was next door playing with her friend, so Jim and Riley and I sat and chatted while I enjoyed my glass of champs, then Riley suggested we take a family walk (just Jim, Riley and me). We ended up walking 2+ miles, came home, made a quick run to NAPA to get the oil for Jim’s car, a stop at Albertson’s to get an ingredient for a pasta salad I was making on Saturday and some fried chicken for dinner.  Thinking there was only 3 of us at home to eat, we only got one chicken (I buy 2 chickens if all 5 of us are eating). I figured the late eaters could make themselves a sandwich or something.  Well, whaddya know….they all came home right as we sat down to eat! Ha! After our too-small dinner we added the oil to the car, then washed it, then got a few things ready for Saturday and off to bed!

Saturday Trevor had a soccer game. Well, actually it was the STATE CUP Championship game and his team was playing against the FC El Tri (supposed to be a premier level team from Hillsboro). There was even a tournament booklet being handed out with his team’s picture: 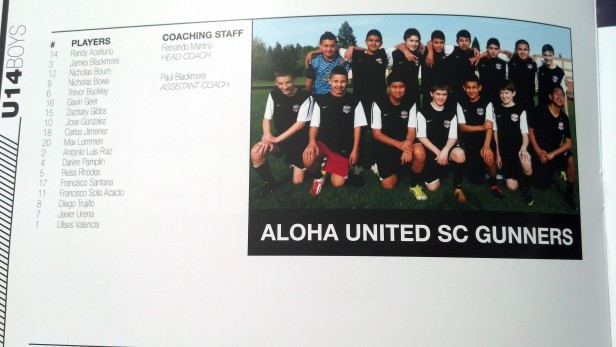 The first half of the game was amazingly perfect. The refs were extremely fair (something we really haven’t seen very often), and the players all played clean and respectfully (not dirty and overly aggressive). Half time hit….we were down 0-1….but clearly felt this was an even matchup and we had a chance to win.

Trevor started the second half and I was excited to see the coach put him in a Forward position. 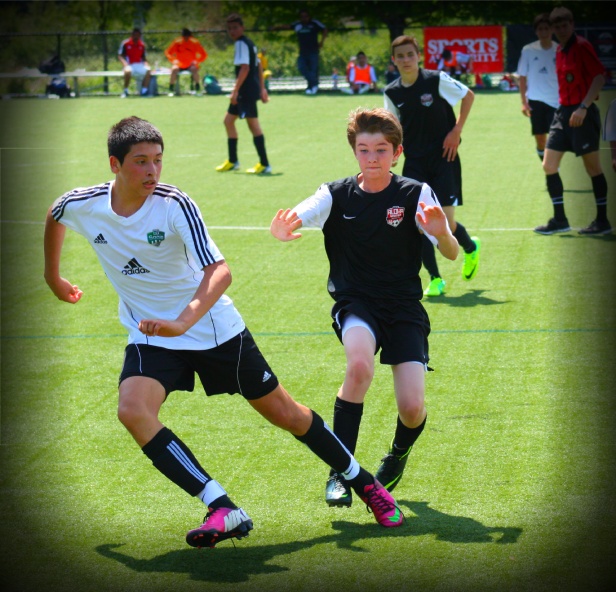 He had an opportunity to head the ball into the goal, but was just an inch or so too short! Poor kid!

He also had another opportunity to score a goal, but the opponent juked the ball from him at the last second.

And then like a switch was flipped, all of a sudden calls were being made against our team…for things we didn’t do….and calls were not being made against the other team when they were clear violations. It was odd. Our coach finally said “enough!” and stopped the game. We forfeited the game.  He said he would not allow this players to be treated this way, nor have the team targeted by officials, so he withdrew the team. This obviously upset the boys as the game suddenly ended, but the game was completely out of control and the kids were frustrated by the calls as well.  It really felt like someone had paid off the refs at half time!

So we ended up as Finalist Champions (Second Place) of the Oregon State Cup. Here’s Trevor getting his award…and a team picture:

We were back home before 2:00 and got ready for our relaxing evening….we had invited some friends to come spend the afternoon/evening with us.  Jim had put the ribs on the Traeger before we left for soccer (so like 9:30 AM) and I was making a pasta veggie salad (recipe to follow), Faye brought over some desserts and chips & dip (a yummy Greek yogurt jalepeno dip). Good food, good relaxing fun! 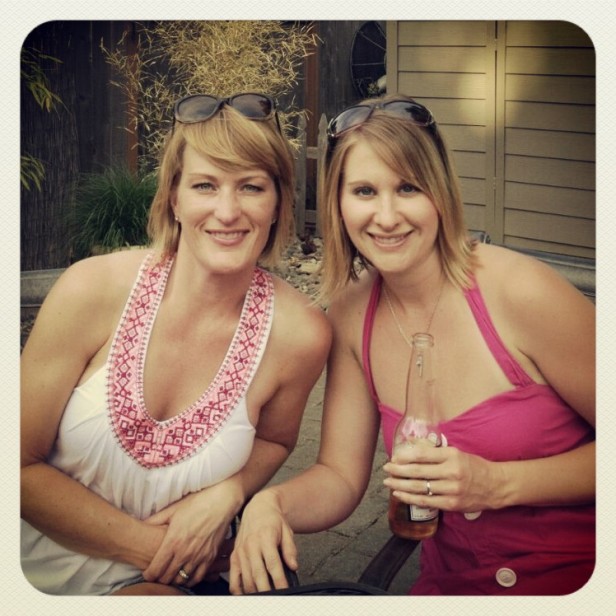 I tried a new champagne that afternoon….it was TOO sweet and fruity.  One glass was plenty- ick.  I’ll just stick with the brand that I like, why mess with something when it works perfectly, right? 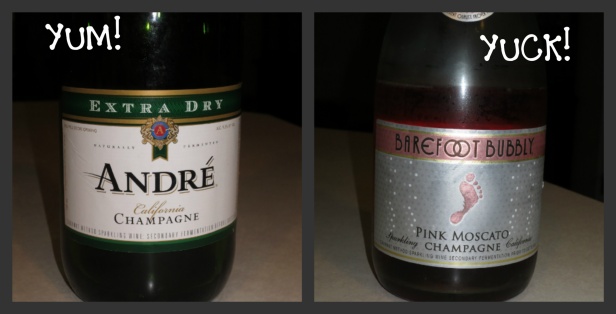 Sunday was Mother’s Day. We don’t usually celebrate it (or Father’s Day, or Valentine’s Day, etc.) so it was just like any other day around here. Except that Jim was kind enough to do all the kitchen clean up for the day! We took my mom out to breakfast at the Peppermill. I ordered an omelette and ate 1/3 there, another 1/3 for my lunch that day and finished the last 1/3 for breakfast on Monday! Portion control.

It was not the relaxing day that we had originally hoped it would be.  After breakfast we ran to Lowe’s to pick up some bags of concrete so I could make some stepping stones (I borrowed a few forms from a friend).

We poured concrete into the three stepping stone forms- it was supposed to be fast setting, but when we went to pour them out of their molds 5 hours later, they weren’t ready. Oops. Stay tuned for the final results. 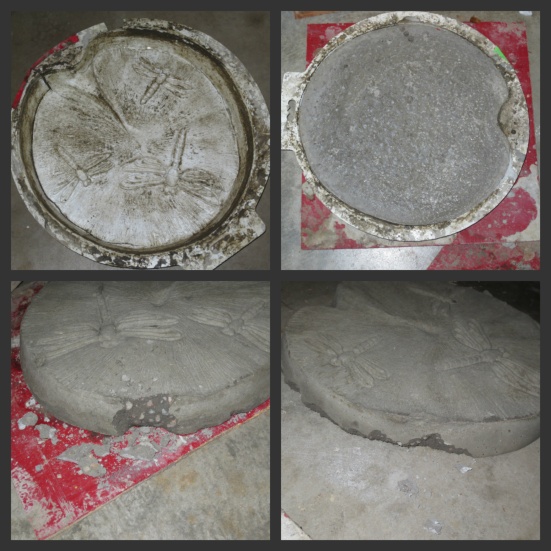 Then we did a bit of yardwork- weeding, trimming, leveling,  some fine tuning of the sprinkler system (hooking up an area that wasn’t hooked up yet.

Then we finished installing hardware on our closet door (which took a long time since it involved chiseling and carving and drilling) so now it’s actually HUNG….but still needs to have the jamb and trim built, stained and finished. 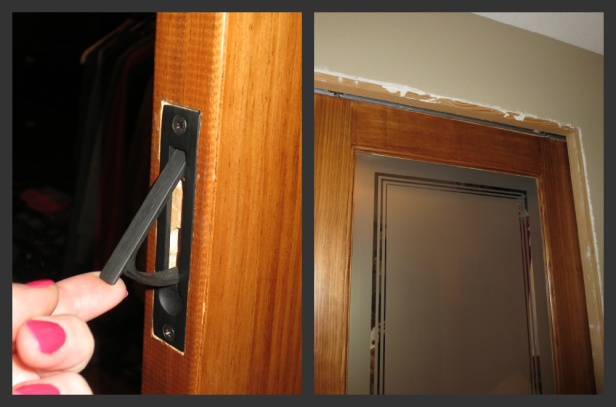 Between all of this, the laundry was done, our usual Sunday chores were done, Riley spent most of her day working on her state report- she chose Pennsylvania and put together an elaborate poster. I should have taken a picture of it, but I didn’t. 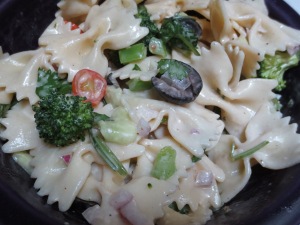