Well, soccer season has been taking place since early August for the girls (and since June for Trevor) but our first games were this past weekend.  Riley had two games on Saturday, Brooke had one, Trevor had one game on Saturday and one game on Sunday.  Sadly, I only took pictures of the girls’ games because I already have a ton of pictures from Trevor’s two soccer tournaments he had in July and August.

Riley is playing up this year on a U11 team (she should be playing U10).  Her team is HUGE because they didn’t have enough girls to make 2 separate teams, so instead it’s one ginormous team of 18 girls.  In the games they play teams of 8, so that means most of the girls are only getting to play half the games, if that.  I didn’t get to see Riley’s first game (I was at Brooke’s first game) but I heard her team won by a huge margin, like 10 to 3 or something like that.  I watched her second game and she got to play a couple times for several minutes and I thought she played well.  Her team won this game 8 to 2.

Brooke’s first game was entertaining because most of the girls had never played before and it’s hard to teach “game” rules during practice.  It took Brooke a while to get comfortable and understand how to play, but once she did…… LOOK OUT!  She did great!  Going after the ball and playing hard- laughing and giggling the whole time, too!  By half time her team was ahead 3 to 1.  Her team won the game something like 4 to 2 if I remember correctly.

Trevor’s team won both of their games.  The Saturday game was up in Camas Washington.  I couldn’t go because I had to take Riley to her afternoon game.  His team won that game 4 to 2.  The Sunday game was here in Aloha and they played extremely well- lots of great passes and really tired out the other team.  We dominated the field for sure, rarely letting the other team have the ball.  Final score was 1 to 0.

Anyway- here’s some pictures.  Some of them might be hard to tell who is who….our team is the black shorts & gray shirts team.  The first 5 pictures are Brooke, the next 3 pictures are Riley.  Both girls are wearing red/black/white/soccer ponytail ribbons which make them a little easier to spot. 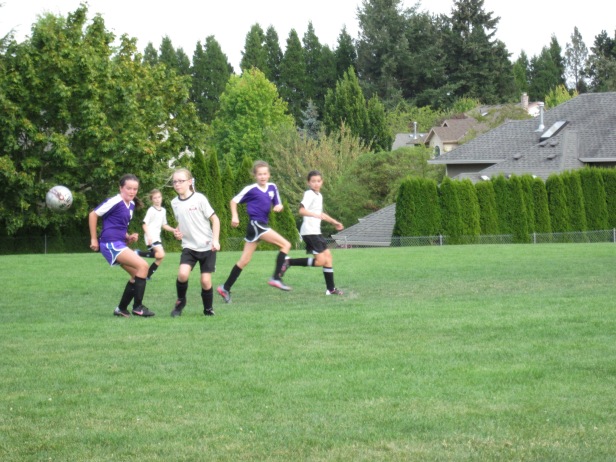